On December 20th, Bruno has been arrested in Paris, during a so common identity check in the metro, used to separate those who have papers and the “others”.

He´s under anti-terrorist investigation in the “fumigenes” case (home made torches) since January 2008, and accused of “transportation and detention of explosive or incendiary material” (the torches); torches prepared for a demonstration in front of the Vincennes Detention Center for migrants.

On the begining of 2008, he has been imprisoned during 4 and a half months. On July, he decided to refuse his judicial control, and was on the run since then. Following this decision, he was wanted by police.

Though the investigation was supposed to be closed on January 2011, he´s been caught on December 20th and imprisoned in Fresnes. 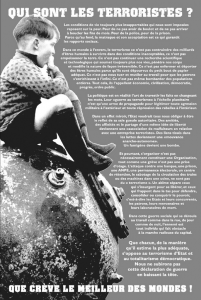 ! Bruno  went out of prison on February 11th. He’s now under judicial control

Here an extract from comrades communique about this arrest:

“Since the arrests of January 2008, we always tried to speak about repression in the struggles, and not to think it as an unconnected moment. And that´s because the repressiv chain always follows the same goal: to stop in all ways insubordination acts, would they be individual or collective. During these three last years, solidarity actions have taken place in different towns of France and elsewhere. This solidarity seems for us to be much stronger when it expresses not only with our comrades, but also with the facts they are accused of. […]

Solidarity is a weapon!”

Answers and actions after the arrest:

More info about these arrests:

This entry was posted in Detention Centre for Migrants, Terrorism and other lullabies. Bookmark the permalink.