Lyon: a squat has strangely burnt down

In Lyon, on the night of December 19th, a fire destroyed the roof and a part of the ancient squatted factory La Friche.  The fire has been almost stopped when people decided to call the firemen, “in case”. Though firemen and police have quickly arrived, the fire was starting again to spread; the residents and visitors watched the roof burning down, while firemen didn’t seem so determined to put it out. The inhabitants, who found themselves with no home anymore, decided to squat the parking, and organize to open a new place. Later on, other details will clear the whole situation… 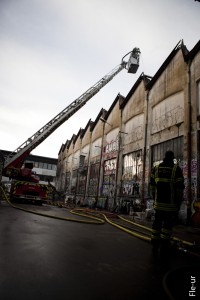 Opened since 8 years, people have settled their life and ‘artistic’ projects there. This building and its associations faced court decision on November 8th. The court decided to give six more months. The Town Council, owner of that place, appealed this decision and asked for a new trial on January 26th. Seems they could not wait no longer: on January 5th, two demolition consents have been put up on the walls. They have been given on december 17th, three days before the burning. Indeed, two thousand square meter disappeared in the fire. Actually it represents only 5% of the total space.

The excuse of danger is then used to close down the building, and ignore justice conclusion, when at the same time, the owner already managed to get demolitions consents. 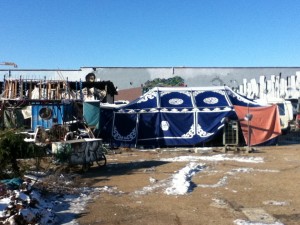 During the fire, police tried to prevent some vans and cars, that were parked near by, to go out the building, using the excuse of emergency. Since then, the parking facing the building is squatted by the ex-residents. Even though La Friche was a legal project, people are treated like rats, and are still waiting for rehousing solution. The owner and his security expert granted a few hours each day to the inhabitants to take back their stuff. Eight years of material and living. “Today is the last day!”was a cop explaining. Wrong information, but easy way to put people under stress.

“Hurry up and take only your neccessary and vital things!
-And my van? I need my van!
– No, take only clean underwears and papers!
– Why should i need clean clothes? to sleep outside? my van is my home!
– You’ill be allowed to take your van later! Now, leave your place to someone else!”

During hours, people were waiting in front of the gate, and getting only 10 minutes each  to pack, surrounded by policemen, escorting and watching you packing only your own workshop. A name and an identity card were asked to be able to enter: “We never know, some strangers to that place may enter and steal!”, claimed a cop. They anyway didn’t know the names of the residents.  Later, a person who had a warrant was arrested on the parking.

On January 21th, people attempted to squat a new place, Le Fort Lamote, after a street parade. Quickly surrounded by tens of cops, they left demonstrating in the streets.

Here an extract from the Occupation Manifesto, of the Sergent Blandan parc:

6. The regaining of the parc for the public use is an obvious fact, precisely because now more than ever, the public space has turned so hostile to us. The contemporary towns, with their nutual bitter competition, find themselves less and less in a position to accept our presence. The unclassifiables, the rom people, the tramps, the artistes, the madmen, the enraged, all these whose praises are isung by the litterature and cinema- and the urban reality evicts. In Lyon, the architecture itself hinders us from laying down on a bench, from gathering with more than five people without arousing supsicion. We are not the sans-voix, but those whose voice, bodies, formes-of-lives, are not bear in the city.

The gentrification process keeps cleaning the metropolis of its undesirable visitors and its regular rebels . The new ‘Lopssi 2’ law has been accepted in France, and endangers nomads, freaks and squatters. The old buildings don’t find any defence in their Seniority anymore. In Germany, a  house-project is about to be evicted on February 2nd: the Liebig 14 has been first squatted in the early 90’s. 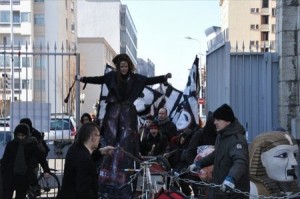 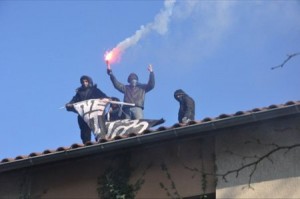 07/02 Rillieux La Pape: a huge ancient building has been opened, and is now squatted.

This entry was posted in Agitation, General, Squats and occupations. Bookmark the permalink.