Ivan was arrested in Paris (20th) this Tuesday, February 8.
He was checked with three other people in a bar a hundred metres from a store where one of them was accused of stealing forty minutes before. This is the argument that the undercover cops used to control them all. Mere pretext? In any case, Ivan is now imprisoned in Fresnes. Like Bruno there was an arrest warrant for him because he had evaded his supervision order. He was previously arrested in January 2008 on the way to a demonstration outside the detention center in Vincennes, in possession of smoke bombs and bent nails. After four and a half months on remand he was placed under judicial supervision in June 2008. In March 2009, charged with a violation of his supervision order (in this case have been seen in the presence of Frank / Farid), Ivan chose not to turn up when he was called and to cease to respect his judicial controls. Bruno is still incarcerated at Fresnes for the same reasons.
FREEDOM TO EVERYONE! 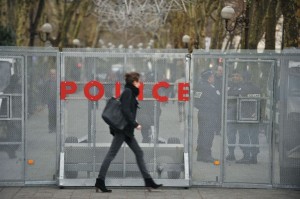