Anti-terrorism detention of 3 people for graffitis

On January 12th, three people have been arrested in Belleville, Paris. They are accused of graffities in solidarity for the revolt in Maghreb: “Algérie – Tunisie / Insurrection“, “Vive l’anarchie“.
First under arrest in the local police station, the special anti-terrorist brigade of the well known 36 Quai des Orfevres took the responsability of that case, and has transferred them to their offices. The next Friday, they have been put in prison.

One person has been released on January 19th, whereas the two other still wait for their trial inside. Though, she’s still under judicial control. 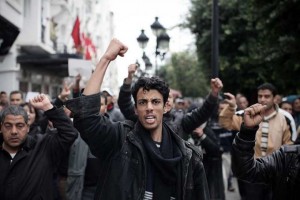 While in Tunisia and Algeria the people revolt, the french government reinforces security on the french territory, making an example of what the consequence of simple solidarity look like.

But people don’t stop expressing their support and calling for concrete solidarity.

On January 18th the Call for the walls Liberation Front has been published; not only to remind how important it is to show up in the streets and cover the white walls, but also to support our friends inside by continuing what they are accused of. 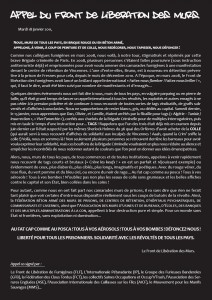 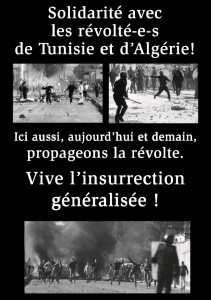 After the arrests, other graffities appeared.In Montreuil, Bagnolet and Paris, on January 16th, one could read in the streets:

Dictatorship or Democratie, down with all states

Down with all authorities

In France as in Maghreb, murderous authorities

Revolution is to topple a system, but also to disrupt the social relations

In Paris again, on January 17th, graffities were left and a communique followed, expressing the excitement of the authors about the conscientious following work of  police about their graffities. 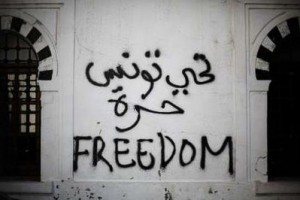 This entry was posted in Action and Revenge, Crisis on the Islands, Detention Centre for Migrants, Outsider Solidarity, Terrorism and other lullabies. Bookmark the permalink.